On Tuesday, September 28, Twitter user @alert5 posted a picture of what appears to be an autonomous underwater vehicle (AUV) on display at the Zhuhai Air Show. The AUV is pictured on a clear dual pedestal stand beneath an unknown aircraft type.

Although the display suggests that the AUV may be an air dropped vehicle, there is no evidence that this is the case. While air-dropped AUVs have been marketed by marine technology companies such as Kongsberg and Qinetic for several years, they are A-size (36 inches long by 4 7/8 inches wide, for deployment from sonobuoy launchers), canisterized, and, with the exception of an aft antenna, have no external components. The vehicle pictured appears to exceed A-size dimensions, and is not ruggedized or equipped with a drogue chute deployment mechanism to slow its descent to the water, making the propulsor, control surfaces, as well as the hull-mounted technologies for communication and navigation highly vulnerable to damage upon impacting the surface of the ocean. 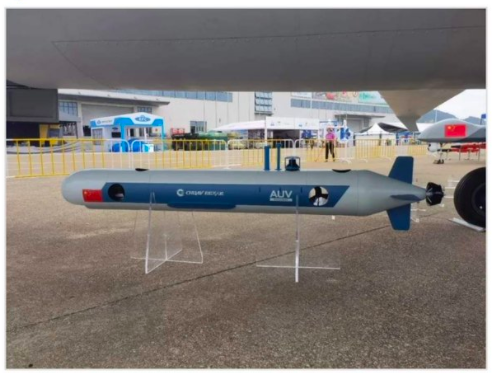 Using the landing gear tire in the background for scale, the vehicle appears to be approximately six to eight feet (approximately two to three meters) in length, roughly comparable to a Bluefin-9 or a Remus 300. A notable feature is inboard tunnel thrusters located both fore and aft for horizontal and vertical maneuvering, much like those of Qianlong-1, Qianlong-2, and HSU-001. 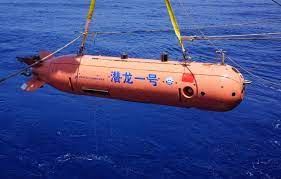 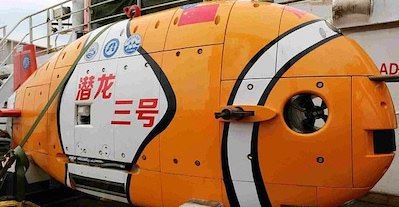 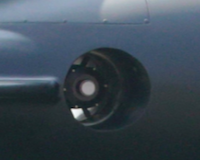 The inboard thrusters would enable a high degree of maneuverability; far more than that provided by control surfaces or the ducted propulsors found in comparable Western AUV designs. This design feature does not indicate a particular mission profile for the AUV, though it would greatly facilitate vehicle hovering and stationkeeping, useful in such missions as Intelligence, Surveillance, and Reconnaissance (ISR), oceanographic survey, or mine countermeasures (MCM).

The vehicle is equipped with operational technologies and components that are standard for AUVs, including antennae for SATCOM, WiFi, radio communication, and satellite navigation, an acoustic modem or ultra short baseline transponder for underwater communication and navigation, and a side scan sonar array for seabed imaging or bathymetry measurement. 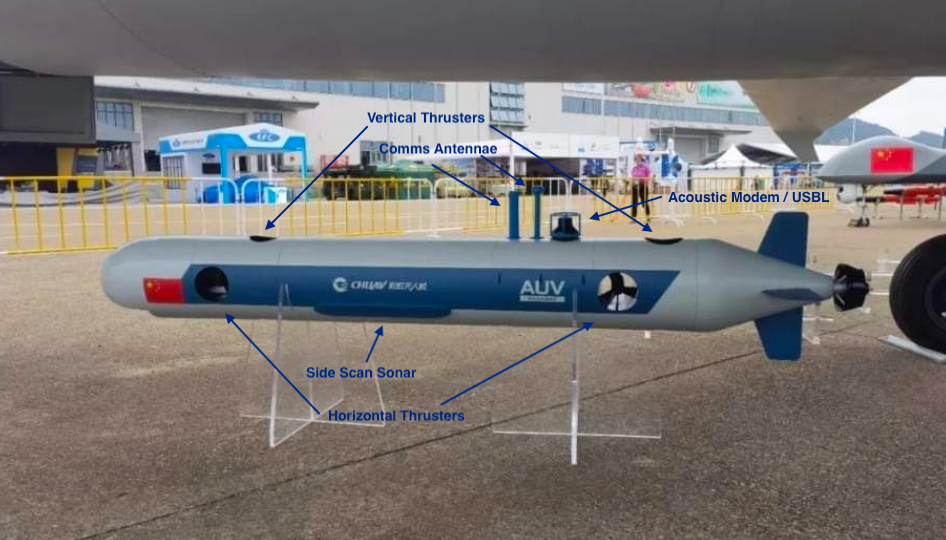 The image caption (via Yandex Translate) contains vague references to the vehicle's construction, missions, and capabilities.

The developer or operator of the AUV is unclear. Imagery enhancement of the logo on the side of the vehicle suggests a similarity to that of "China Hydrology," but there is no evidence that the vehicle is operated by a Chinese water management authority, such as the Ministry of Water Resources. 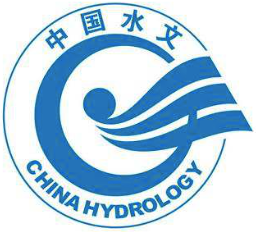 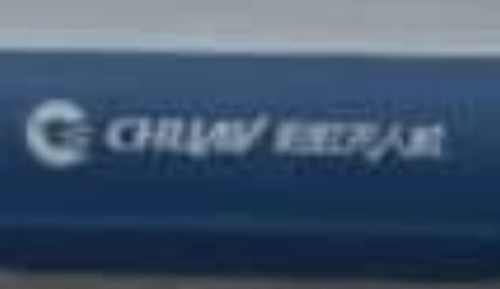 Although the aircraft is capable of carrying a wide range of payloads, it is unlikely that the AUV, as displayed in its current design, is among them, and is likely displayed to illustrate the potential for deploying AUVs from drone aircraft.

A Janes article states that the AUV has been developed by China Aerospace Science and Technology Corporation (CASC), a subsidiary of China Academy of Aerospace Aerodynamics (CAAA).