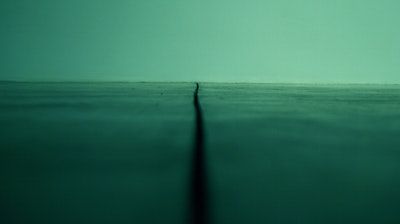 Russia continues to move forward with the development of Poseidon's host platforms.

1. MONITOR HOST PLATFORMS
To the extent that Poseidon is a submarine-launched intercontinental underwater missile, its host platforms are analogous to ballistic missile submarines, and as such should be aggressively monitored like any adversary SSBN.

Given the inherent complexity of detecting and tracking undersea targets in the vastness of the open ocean, we must assume that in the event of war, the West may not have a lock on each of Poseidon's host platforms, necessitating a means to counter the weapon itself.

2. DESIGN COUNTERMEASURES
Current and planned systems in the Navy's inventory could, with technological enhancements and modifications, provide an effective barrier against a Poseidon attack. Two variants would be necessary:

The two systems would share a similar design architecture and utilize similar tactics to detect, identify, localize, establish an integrated kill box, and engage Poseidon at standoff range. The concept is essentially a counter-UUV Strikepod blending the speed/maneuverability of modern torpedoes with the AI/comms of UUVs. (Torpedo endurance is very limited, but UUVs, for now, lack the propulsive power to engage a target like Poseidon.)

- - Detection, Identification, Localization
Though referred to as both an AUV (autonomous underwater vehicle) and a torpedo, for purposes of countermeasure design, Poseidon is essentially a small, fast moving submarine, and like any submarine, it will radiate noise - particularly when running at high speed - which can be detected via passive sonar systems located on the seabed, on the surface, or within the water column. Nevertheless, ASW is an extremely time-consuming and tedious endeavor, and detecting, identifying, and tracking Poseidon will be extremely challenging.

An integrated network of seabed, surface, and undersea sensors would provide a distant early warning (DEW) sonar network for the swarming Hammerhead system.

- - - Decision and Engagement
Once detected, identified, and a bearing established, the Swarm AI will quickly generate an initial firing solution, taking into account Poseidon's current course, depth, and speed. 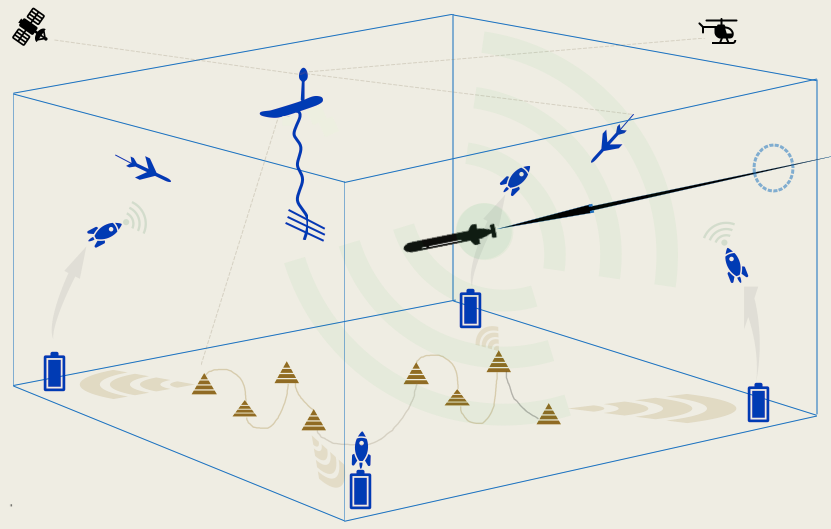 Open sources suggest that Poseidon (70kts) could outrun Mk48 ADCAP (est. 60 kts) or Mk54 (est. >40 kts) torpedoes, but this would primarily be a factor in engagements originating in the vehicle's rear hemisphere - i.e. all-out pursuit. During engagements originating in the forward hemisphere, however, a swarm of countering torpedoes would have the advantage of maneuverability and numbers, but only with adequate warning to launch, orient, and engage before Poseidon can evade and escape.

While Poseidon's speed, endurance, and depth do provide a considerable performance advantage, it is reasonable to assume that its onboard AI will also be trained to defeat countermeasures and/or counterattacks, either by deploying decoys/jammers, or by maneuvering to avoid incoming fires. It is further reasonable to assume the AI's training will incorporate the presumed (or known) performance data of NATO torpedoes. 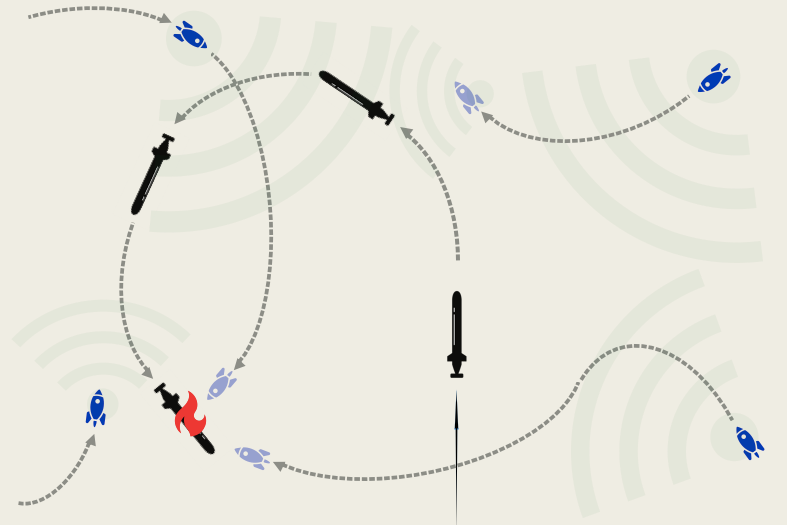 Figure 2: Swarming torpedoes descend upon Poseidon, forcing it to turn, bleed energy, and maneuver into the path of kill vehicles.

Figure 2 is a 2D representation of a kill box engagement which illustrates the conceptual use of active sonar in driving Poseidon into awaiting kill vehicles. An actual engagement would of course take place in three dimensions, with the torpedoes seeking to prevent Poseidon from using its depth capability as an escape vector. While this may not be as much a factor during littoral engagements, it would likely be a factor during tactical blue water engagements against CSGs. Moreover, open source imagery intelligence indicates that Poseidon is not equipped with maneuvering thrusters (either internal or external), and therefore any movement in the horizontal or vertical planes will be initiated by rudder or horizontal diving planes, suggesting that the weapon will maneuver slowly, making it vulnerable to head-on attacks. The weapon's turn radius, as previously noted, will also be quite large - larger than what is depicted in Figure 2 - a weakness exploitable by tighter-turning torpedoes.

The counterattacking Swarm AI would be distributed across all sensors and effectors in order to provide the "omnipresence" necessary to coordinate high-intensity operations in a three dimensional tactical environment.

While running at high speed, Poseidon's passive sonar sensitivity will degrade due to reactor and hull flow noise.

The above approach is for defeating an incoming strategic attack - i.e. one targeting a port or coastal infrastructure. But Poseidon may also be employed as a tactical nuclear weapon to destroy carrier strike groups (CSGs) or even SSBNs, in which case a fixed defensive system will not be adequate to the task.

Defending a CSG, then, would require a somewhat different approach, one that cannot rely entirely, if at all, on the fixed seabed sensors/effectors of an IUDS. On detection, manned submarines, (high-speed) XLUUVs, or (not pictured) ASW drones, helos, or MPAs, would sortie to intercept, establish a kill box, and engage with swarming torpedoes. Figure 3 underscores the need for long range engagement, especially as Poseidon is capable of traveling 1 nm in 51 seconds. 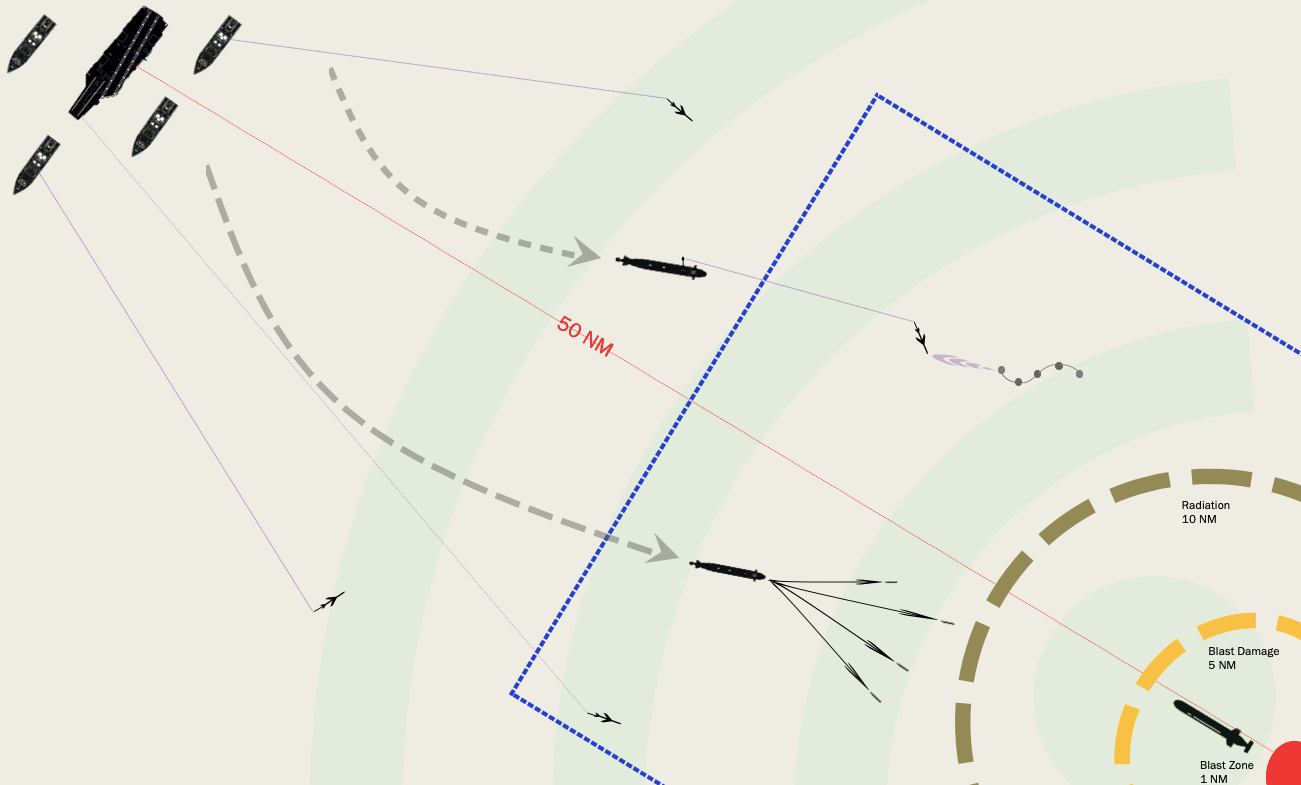 In July, 2019, we proposed the idea of "Autonomous Undersea Denial Networks" (AUDENs) - flexible systems of sensor and effects-based UUVs which can be deployed from energy modules located on the seabed and/or within the water column. Each AUDEN is a compact module that can be rapidly deployed from submarines, surface ships, or even aircraft. One of the key assumptions of AUDENs, however, is that the UUVs will be capable of a significant sprint speed, something unavailable to current UUVs. In the absence of a significant power source, UUVs will be confined to speeds in the single digits to low teens, making them unsuited to confronting and defeating a high-speed threat like Poseidon. Thus, the effectiveness of AUDENs would depend in large part on the (approaching) convergence of UUVs, torpedoes, and mines.

A rotation of UUVs could also be deployed from escorting MUSVs utilizing a built-in UUV docking bay, enabling persistent, wide area sensor coverage. We proposed such a capability with the Esquire-class "Microfrigate" (MUSV). 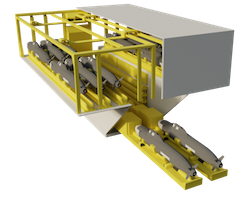 HI Sutton has proposed a coastal defense concept as well, with sensors arrayed along the seabed and networked to encapsulated torpedoes. Sutton has also put forth a long range defensive system that involves submarine-launched hypersonic glide vehicles.

There is also the potential for non-kinetic effects to be employed by the Swarm, nearby submarines/UUVs, undersea nodes, or by Poseidon itself. For example, Poseidon may be able to jam Swarm communications using acoustic countermeasures. The Swarm may be able to manipulate Poseidon's AI using acoustic emulators to project false targets, or to inject false sensor readings to deceive onboard navigation systems, forcing a "controlled flight into (underwater) terrain" - CFI(U)T. Our analysis of the potential for undersea cyber operations can be found here. An analysis of Poseidon-specific cyber operations will be the subject of a future post.

We are currently developing a version of Strikepod Command that is specifically designed to simulate countering a Poseidon attack using a range of unmanned undersea systems - seabed sensors and effectors, sensors within the water column, unmanned surface vessels, as well as Strikepods, networks of advanced microsubmarines which can be configured both as sensors and effectors. The game also includes cyber operations, and the capability to manipulate Poseidon's AI through denial and deception. Countering a novel weapon requires equally novel ideas, which we hope Strikepod Command: Countering Poseidon will do.