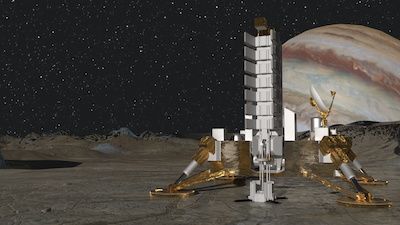 [T]he universe is an ocean, the moon is the Diaoyu Islands, Mars is Huangyan Island. If we don’t go there now even though we’re capable of doing so, then we will be blamed by our descendants. If others go there, then they will take over, and you won’t be able to go even if you want to. This is reason enough.

The voice of the young ensign wavered, amplifying the tension that permeated the dimly lit control room. Dr. Shilpa Devareddy, director of NASA’s Europa Lander program, stood behind a battery of officers and mission specialists, her eyes fixed on a large, holographic sphere, a three-dimensional tactical display of the Jovian moon’s ocean interior where two groups of small ellipses, one red, one blue, were converging. The unfolding events had occurred nearly an hour before, the time it took for the data-heavy transmission to reach Earth, but they may as well have been happening in real time.

The blue ellipses morphed into detailed representations of Atom-class XE microsubmarines, variants of the U.S. Navy’s next-generation AUV fitted with advanced scientific payloads. Each red ellipse now depicted a similarly altered variant of the People’s Liberation Army Navy Shāyú, or “shark.” Atop their respective rockets they’d journeyed six years, over 390 million miles, only to then endure a tedious, months-long bore through miles of ancient ice before slipping into the dark, frigid waters of Europa.

Shilpa shook her head. How did we get here? In many ways it was entirely predictable, with such confrontations now commonplace on Earth. Beginning in the late 2020s, as the first autonomous pods of microsubmarines entered on duty, the great powers began exploiting the opaque undersea domain to wage a shadowy, anonymous “gray water” conflict of denial, deception, and destruction.

And of course astrobiology, like all of space science, had been slowly subsumed by geostrategy, so when faint signs of life had been detected by the lander mission’s predecessor, Europa Clipper, it seemed only a matter of time before Atoms and Shāyús would be clashing on the watery moon. As the race for Europa intensified, and Beijing doubled down on its excessive interplanetary claims and nationalist rhetoric, NASA found itself turning to the U.S. Navy for an underwater platform capable of integrating sensitive scientific instruments, and, if necessary, defending itself against aggression.

Now all Shilpa could do was watch and wait, and hope that the AI had been properly trained, that Earthly tactics and countermeasures would be enough, that the mission would survive another day.

She watched as the targets closed.

She pictured her daughter, swinging in the backyard.

The way she’d look toward the heavens -

As if wondering to herself:

Is anyone out there?